How often have you wanted to get away from it all and move somewhere completely different? For Stephen and Andrea Hutton, that was a thought that was constantly on their minds for 15 years. Their dream was to move to Portugal and embark on a new life. For years, it didn’t seem like it would be possible, then a chance encounter finally offered an opportunity to make it happen. 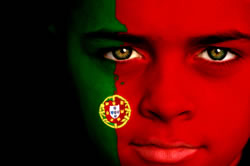 How often have you wanted to get away from it all and move somewhere completely different? For Stephen and Andrea Hutton, that was a thought that was constantly on their minds for 15 years. Their dream was to move to Portugal and embark on a new life. For years, it didn’t seem like it would be possible, then a chance encounter finally offered an opportunity to make it happen.

“When I was young, we used to come on holiday to Portugal, mainly the Algarve region, and I always remembered my holidays as special times,” explained Andrea. “The weather was fantastic, the days somehow seemed longer, and we were wonderfully relaxed and carefree.” As she grew older, the memory of Portugal stayed with her. “When I married Stephen, we came to Portugal on our honeymoon and he fell in love with the charm of the country, too,” she recalls.

But, despite their love of Portugal, for many years they had to stick to holidaying there, as it wasn’t a viable option to relocate. Back in the city atmosphere of Manchester, they spent many years dreaming of moving abroad, but all too often they assumed it would long remain purely an optimistic dream.

“We never realistically thought we’d be able to afford to move to Portugal, especially with a family,” admits Andrea. “Like others, we had commitments and bills to pay here. But in the year 2000 we were on holiday in Portugal again and met another couple at our resort. We hit it off with them immediately and spent lots of time together over the course of the week. Through various long chats, we discovered that they’d always wanted to move to Portugal too, but had the same reservations as us. It struck a chord and got us thinking even more.”

Back in England, the Huttons kept in touch with their holiday friends. Before long, their dream of moving to Portugal had moved up a step – with the idea that they could get together and jointly buy a property. “Some people thought we were mad,” admits Stephen, “as we’d only recently met them and were suddenly thinking of buying a property together!” But it seemed the ideal solution to their problems, they got on very well and had children of similar ages, so they decided to take the plunge and give it a go.

In the early stages, they all undertook lots of research and lengthy planning, trying to work out what they could afford to spend on a property and where they’d all ideally like to live. The two couples were both set on moving to Portugal together, to live there full-time, so they had to ensure they bought a property with enough space to accommodate them all and their families.

“The planning stage was probably the most difficult in many ways,” explained Andrea. “There were so many figures being discussed, so many logistics of where would and wouldn’t be suitable and it took a while to get it all sorted out.” They also had to think about practical considerations. Although their friends ran a business from home, which could be transferred, without too much hassle, to Portugal, the Huttons had to think about what work opportunities would be available to them in Portugal.

Once they had it clear in their minds, they all went out to Portugal to explore potential properties. “We decided to focus on the Algarve area, as that was the top location on our list. We saw some lovely houses and thought we could put in an offer, but then the estate agent warned us that it would be better if we’d both sold our homes in England first, or at least had the money ready and arranged,” said Andrea. “It was a bit of a shock at first, as there we were thinking we’d done our planning so well, but we’d overlooked the obvious.”

The money issue is something many foreign house hunters overlook, but acted as the catalyst to encourage the Huttons and their friends to head back home and sort out the financial issues. “We ended up selling our home in Manchester first,” explains Stephen. “We then moved into rented accommodation for a while, whilst we continued to look for a house in Portugal.”

It took several trips to Portugal and six months before they discovered the perfect house. “We ended up buying a villa near Faro, as we all decided that being close to the airport was a definite bonus. We also ended up spending slightly more than we’d anticipated, but the house more than makes up for it. There’s plenty of space for all of us and we’ve even got a pool,” explained Andrea.

“It suits us being near Faro, as it’s a very lively city and is great for eating out and shopping,” she says. “It’s also handy for our children (now 18 and 21), as they’re used to a city environment and can easily fly between here and the UK, where they’re studying.”

{mosbanner right}Settling into life in a new country seems to have run smoothly. “Luckily, the Algarve is very popular with expats, so there were plenty of other Brits already living here. They’ve been very welcoming to us, as have the locals, and we seem to have adjusted well to living here,” says Stephen. “The biggest difference has been the weather – we weren’t used to so much sunshine!”

Not only did they have to cope with moving to a foreign country, but they also had to get used to sharing a home with another couple. Thankfully, though, despite a few initial teething problems, they all seem to have adapted well to their change in lifestyle.

Compared to life in Manchester, living in Portugal is very different. Previously, Stephen worked in a city centre hotel, but now he’s working in a restaurant in a coastal resort. Although it’s still stressful at times, as jobs can be, he enjoys the more relaxed attitude to life that the Portugese have. “The locals are so chilled out that it just can’t help rubbing off on you,” he says, laughing.

Tips for other buyers

“Our best advice to others thinking of moving abroad is to do your homework first,” advises Stephen. “We thought we’d covered everything in our early planning, yet when we arrived in Portugal the reality was vastly different. In hindsight, we should have thought more carefully about the financial aspects and of selling our house in advance. It’s easy to get carried away with the excitement and overlook the crucial aspects.”

They also advise setting aside plenty of time for visiting a country prior to moving there. “We had a great time exploring the area, both the Algarve where we finally settled and other regions. Even though we knew Portugal already, we wanted to be aware of all the options, the benefits and downsides of various locations and be sure that we definitely picked the area that was perfect for us.”

Like many other buyers, the Huttons relied on a self-designed tick box system to ensure properties and areas met all their needs. “We devised it back in England, as we all had certain preferences. Some boxes were essentials that had to be met, like the number of bedrooms in the house, whereas others were “˜nice, but not 100% necessary,’ like having a pool or a sea view,” Stephen explained.

“It can be really overwhelming when you’re viewing so many properties and, on the surface, they all look gorgeous and you can suddenly imagine yourself living there. But, as we found, it’s easy to get carried away and overlook something that actually wouldn’t be so great. Having our tick box charts helped us be more methodical in our search and ensured we did find a property that really was right.”

Moving abroad with another family, especially if you’ve not known them long, isn’t everyone’s cup of tea, but for the Huttons it certainly seems to have worked. “By teaming up with other people, we were able to buy the type of property we could only dream of before. We’d definitely recommend it to others in a similar situation as an option worth exploring.”