After six years living in New York, professional American sports are still a mystery to me. This is mainly because keeping up with the football on television is a full time job. The overwhelming amount of Premiership coverage is ironically down to the Australian, Rupert Murdoch. His News Corporation-owned Fox Sports Channel was recently renamed the Fox Soccer Channel in acknowledgment of its majority market. 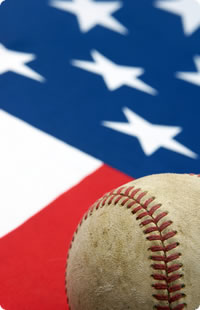 After six years living in New York, professional American sports are still a mystery to me. This is mainly because keeping up with the football on television is a full time job.

The overwhelming amount of Premiership coverage is ironically down to the Australian, Rupert Murdoch. His News Corporation-owned Fox Sports Channel was recently renamed the Fox Soccer Channel in acknowledgment of its majority market. The weekend kicks off with two live Premiership games on a Saturday, then one on Sunday and another on Monday. Recordings of other weekend games are broadcast throughout the week and if that’s not enough, there is a weekly review show as well. Think match of the day on steroids – footage from every weekend match, all the goals and none of the irritating sofa punditry. It doesn’t stop with the Premiership. Should you desire, you could spend the weekend watching games from the German, French, Italian and Argentinean leagues, all of whom also get their own weekly roundup shows.

The downside — there has to be one — is the woeful American commentary. There is talk of the offense, players "coming up big" and, a particular favorite of mine, the red zone. The red zone is as yet unrecognized by UEFA or FIFA, but would appear to be any area of the pitch from which a shot is possible. Thankfully, the Premiership matches are broadcast with their original commentary intact.

Football is only the start. International Rugby matches are covered by the Irish cable channel Setanta. Unfortunately, or perhaps favorably, depending on your point of view, Setanta is only available in bars, requiring a trip to the pub to catch the rugby. 7am games are particularly arduous, although the early hour doesn’t deter the majority of the fans from consuming considerable quantities of beer.

However, I cannot fail to escape the two events that dominate the American sports calendar — the World Series and the Super Bowl. Like the World Cup, they both transcend their sport and are avidly followed by sports fanatics and non-sports fans alike. The World Series is a best-of-seven playoff between the winners of the two Baseball leagues, the American League and the National League. Quite why there are two leagues has thus far escaped me, but it has not reduced my enjoyment of the World Series. Baseball is a game of statistics and subtlety; of tactics and of slightly overweight men running around in striped trousers. A bit like cricket, apart from the trousers.

The Super Bowl, on the other hand, is nothing like cricket. The culmination of the American Football season, it is one of the most watched television events in the country. My understanding of the game is less than comprehensive, but I think that the most expensive advert broadcast wins – no mean feat considering that a 30 second slot can command fees of over $2.5 million.

There is also a game of American Football held on the same day, a game of brute force, of territorial smash and grab. It is, in other words, a game that lends itself to being watched with a beer close to hand. Unsurprisingly, Super Bowl Sunday has become an unofficial holiday upon which the country gathers to watch the game at Super Bowl parties. Generally an excuse to meet friends, drink and eat, it is easy to forget that a football game is taking place at all.

And that’s exactly the sort of game I can understand.

Ten Tips to Finding the Right Mortgage for your Florida Home