Our Move to Australia

We started the visa process for our move to Australia in June 2004. Having never traveled any further south than France and never managing to get to Scotland, it was quite a shock to everyone who knew me that I would want to move to Australia!  I had only ever been on a plane once and that was only in the last few years.  However, we felt that if we didn’t do it now, we would never have the chance in the future. 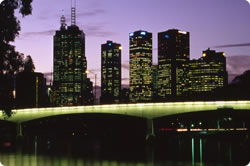 Having never traveled any further south than France and never managed to get to Scotland, it was quite a shock to everyone who knew me that I would want to move to Australia!  I had only ever been on a plane once and that was only in the last few years.  However, we felt that if we didn’t do it now, we would never have the chance in the future and our kids were both keen on going.

We started the visa process in June 2004.  Our daughter (Zoe) had been offered a free holiday with her friend to Arizona during the October half-term and we decided, with her permission, for myself, my husband (Kev) and our son (Adam) to visit Australia and do a reccie in Bendigo (Victoria).  So at the end of October 2004 we did the long-haul flight to Melbourne and did a whistle-stop tour of Bendigo in 8 days!  After such a long flight and the drive north to Bendigo, I must admit I did think, "I don’t like it, how am I going to get out of this one?"  But that was because I was so tired, and after a couple of days I began to like Bendigo.  We looked round new houses and just got a feel for the area, we liked the town, which was so clean, plenty of places to park and little traffic.

We got our visas in April 2005, house got put on the market, sold and we flew out in December.  All through the visa-waiting process, I did have times when I thought, "Is it going to be worth it, leaving family and friends, leaving a lifetime of familiar places, just for more sun, and a bigger house?".  I know that Kev was also worried because a lot of responsibility fell on him to get a job as a mechanic (because we are STNI).  At times when I felt myself panicking, I would have a scan on the forums of this site and look for anyone who had posted their views on "the move".  I must say though, we were lucky in that friends and family were all behind us, there was only one person who poo-pooed our decision and could not understand why we would want to rip our family away from everything that they knew.  I suppose that in a way it made us more determined to make a go of it.

We arrived here on 7 December 2005 and stayed at the same holiday apartment that we had in 2004.  We had remained friends with the owners, so it was nice to go back and see people we knew.  Before we arrived here we had been on British Expats and had been in contact with a member who phoned us the first day we arrived!  We met her and her husband a couple of days later and they have been a great help, and we are very thankful.  Zoe had also been in contact with an Ozzie girl and within the first couple of weeks they had met up.  We stayed at the apartment for two weeks and in that time we had bought a car, a motorbike, enrolled both kids at school and sorted out a rented house.

There were times when I thought of all the stuff that we had to do and it was easy to get into a panic about it all.  But you have to do everything in moderation, don’t try and do everything at once.  We had to prioritise everything.  Luckily for us, because Christmas was fast approaching there seemed little point in trying to get a job, and we wanted to move into the rental property before looking for work. The property was unfurnished, so that was another job, getting furniture and bits and pieces, which takes a surprisingly long time.

When we were ready to look for work, Kev found one a job within a couple of weeks.  He is a mechanic and just wandered around the garages and left them with a CV.  Unfortunately all the places where he wanted to work didn’t have any vacancies, but he did get employment elsewhere and has been at this garage for four weeks.  He’s settled in really well with his colleagues.

I, on the other hand, have found it quite difficult to get office work.  I have applied for loads of jobs and been for a couple of interviews; but haven’t got any further than that.  The agencies don’t work the same as in the UK, you have to keep reminding them that you are looking for work. I did have a call from one agency who said they had just taken on a temp job and I started working there the following day. I have now been there two weeks and I think they may want me to stay on a bit longer.  At least if nothing comes of it, I will have a referee in Australia.

I didn’t come out here with rose-tinted glasses, I had my concerns about whether we were doing the right thing and my main worry was, what if Zoe doesn’t like it here and in a couple of years she wants to go back to the UK, how would I feel that our small family unit would be torn apart.  Obviously, I don’t know if that will still happen, but for the time being I don’t think about it much.

I have yet to find out if the cost of living is more or less than the UK, not having a permanent job yet it is difficult to say. I think that we spend the same amount on everyday food items as in the UK, and we haven’t had many bills in yet to compare on that score.

I know Zoe misses all her friends in the UK.  She has made loads of friends here, (even nabbing herself a boyfriend within a couple of weeks of being here), but it is early days for these new friendships to blossom.  Adam has settled in remarkably well.

{mosbanner right}So after three months of living here, I can honestly say that I don’t miss the UK, don’t get me wrong, I loved living there but I got to the point where I wanted to try something new. I also had this vision of our kids still living with us when they are in their thirties because they wouldn’t be able to afford a place of their own and I would much rather live together here than cramped into our little house in the UK.

I don’t miss family or friends as much as I thought I would, (I know I should), but because we text, email and chat to each other regularly on Skype it seems enough for me.  I don’t feel like a foreigner here, I like it when people pick up on my accent, because they are so interested in why you are here.  For the first couple of months, everyone said "Welcome to Australia" and they really meant it.  Everyone’s so friendly here and helpful.  People have time to talk to you and they are all really proud of being Australian.

The weather has been absolutely fantastic, I personally think it boosts your outlook on life.  We have a lovely house which gives us all our own personal space, which we would never have been able to afford in the UK.  I’m glad that we made the decision and took the plunge to come here.

Thanks for reading, and I hope this might help any of you that have the usual doubts, as I did, about moving to Australia.

It Is Not All Bad