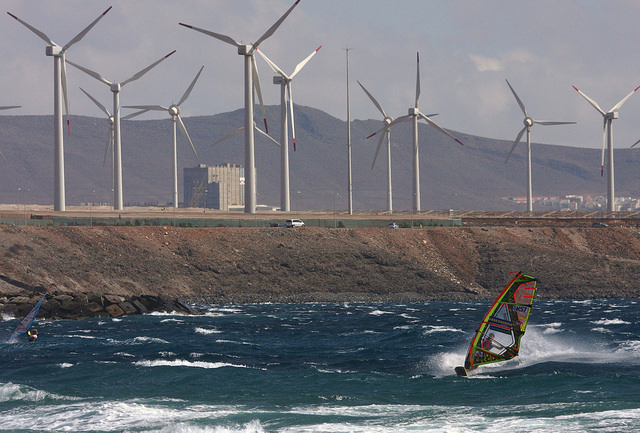 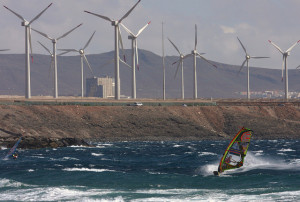 Living in the Canary Islands, I quickly learned that most people living in Northern European countries have little time for our occasional complaints about the weather. After all, as an Ancient Greek once declared, we live in the “Fortunate Islands”; the weather is as near perfect as we can get in Europe, and survey after survey has proven that these islands are the healthiest places in the World to live.

We live quite close to what is often billed as “The Windiest Place on Earth”. That place is the village of Pozo Izquierdo, home of the World Windsurfing Championships, and the place to go to watch spectacular waves and to enjoy the surf. Well, it would have to be windy there, wouldn’t it? After all, little or no wind would make for a very sad or non-existent World Windsurfing Competition. However, the downside is that sometimes the winds in the area are so strong that they carry sand, soil, dust and goodness knows what else to towns and villages across a large part of the island.

Occasionally, the wind is too strong to even take Bella, our dog, for more than just a very short walk on the open land outside our village, and I have often considered buying her some goggles in order to cope with the sand and dust, as it bites into our eyes as we walk. It is often challenging to face and walk against these strong winds, and I have occasionally seen children and small adults swept off their feet, as well as the occasional vehicle overturned on our busy motorway.

This year has been exceptionally bad for strong winds, with sand and soil piled up against the sides of properties and the edges of roads after a particularly windy period. With the sand and dust, also comes a range of bacteria, which often results in breathing disorders and eye infections. Admittedly, it is only for a short period of the year, and is forgotten as quickly as it came.

Readers may well be asking why we chose to live in such a windy spot on the island, and living in windy areas is not for the faint hearted. However, recognising that there is no such thing as perfection in life, and after trying out several locations on the island over a few years, we came to the conclusion that we would much rather face the refreshing, albeit sometimes violent, winds on the east coast, rather than being cooked alive in the south of the island during July and August. High temperatures may be great for a holiday, but I am still very happy to exchange excessive temperatures for cooling breezes. As far as weather is concerned, we are very fortunate and have little to complain about. However, as a Brit, it is important to retain our national identity and complain about the weather from time to time.

Barrie Mahoney was a head teacher and school inspector in the UK, as well as a reporter in Spain, before moving to the Canary Islands to launch and edit a new English language newspaper.