I wasn’t sure we’d last the year when we moved to Les Landes in the sunny South West of France. After all what were the chances of a short, fat, dumpy, little old lady & her three boys coping with a 42 acre jungle, a large rambling house whose plumbing had more holes than GruyÃ¨re & a couple of buildings which might one day scrub up to make good gites? 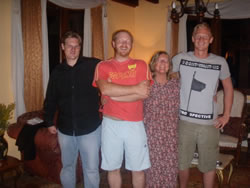 I wasn’t sure we’d last the year when we moved to Les Landes in the sunny South West of France.

After all what were the chances of a short, fat, dumpy, little old lady & her three boys coping with a 42 acre jungle, a large rambling house whose plumbing had more holes than GruyÃ¨re & a couple of buildings which might one day scrub up to make good gites?

Okay, so there were stables & plenty of outbuildings, but we had no shrub munching beasts to put in them. Or, better still, any mechanical tools which could actually tackle so much land. Just one old electric mower. And it takes an awfully long cable to mow 42 acres!

But it wasn’t going to be all hard work. After all this was the prestigious property which had once sheltered the Prince of Cambodia &, as the locals constantly reminded us, had been the home of Patrick Sebastien, the French TV star. This place had seen a lot of fun. Unfortunately for us the contents of the enormous swimming pool, where so many famous people had enjoyed the fun, were now an inky black swamp & the water in the lake, where the same celebrities had cast their fishing lines, was dropping alarmingly as it gushed away down a drain, taking all the trout, carp & perch with it.

My husband took one look at everything we had to do &, very sensibly, decided to continue working in the UK. His sensitive pianist fingers were not used to manual labour & could be put to better use financially supporting us while we transformed the ramshackle ruin into the country estate it was longing to be. We had everything we needed to do the job.  As well as the trusty lawn mower we had a chargeable electric screwdriver, the Collins Guide to DIY & a copy of the Pages Jaunes to search for local builders.

The builders all said roughly the same thing, “March? I can’t do March. September maybe. No, not this September. Next year. Perhaps.” We were pretty much on our own. Good job we had that DIY manual.

And I’d got my boys.

Son Number Three had just finished school & wasn’t sure what he wanted to do next. After hacking away at the jungle, painting everything that didn’t move & working his fingers to the bone he decided he didn’t want to renovate property. He took me to one side early on in our adventure & said, “It’s very nice Mum, but it’s not normal, is it?” He’s now a very intelligent young man who is a trained nurse & has just started a university degree course doing psychology.  I suspect when he’s a fully qualified psychologist he’ll take me aside & say, “It’s very nice but Mum, but now it’s officially not normal!”

Son Number Two is a classically trained chef, who was used to using power tools. So long as they were made of stainless steel & lived in a kitchen. A young man who could cook a perfect soufflÃ© but had never changed a plug in his life.

Son Number One is autistic. He likes his life to be ordered, with routines. Before we moved to France he was overweight & spent most of his time watching films. He’d watch the same one over & over again until he could repeat the dialogue perfectly. When we discovered our old television didn’t work in France we thought he’d be distraught. There was no money for a new one, any spare cash went on buying tools. Every evening the boys & I would play charades in front of the fire, with Son Number One acting out entire film sequences for us to guess. Now, he’s a lovely, gentle, handsome young man who takes our Pyrenees Mountain dog for a walk every morning to collect the post. He goes swimming regularly & has a strict exercise regime which includes stacking logs for the fire. He still enjoys films but tends to save them for Tuesday afternoons, when a befriender comes to watch them with him while I go shopping.

Did we last the year? Did the work get done?

Well, we’ve been here nine years now, the gites have been running successfully for the past eight & the house scrubbed up into a beautiful six bedroom Landaise style country farmhouse. We did find help. Relatives flew in from the States to give us a crash course on general repairs & local artisans managed to fit us in to their busy schedules to do the major work.

But, it was Son Number Two who really brought the place to life &, in the process, learnt to turn his hand to just about any job. He not only whisks eggs he can mix concrete, he ices cakes & plasters walls, he joints chickens & chainsaws logs, although not all at the same time, obviously! He has a kitchen full of cooking equipment & a barn full of manly power tools. He plugged the drain & restocked the lake with fish. He cleaned the pool so it sparkles in the sunshine like a giant sapphire. We replaced the electric mower with a ride on one & he’s tamed the jungle back into a landscaped park with a paddock & woods. He planted an orchard & created a vegetable garden so we always have fresh produce. He bought chickens & ducks & geese & guinea fowl from the local market & scoured the brocant shops enabling us to furnish the house & both gites.

But, despite all that, the property is back on the market.

Was it too much for this short, fat, dumpy little old lady to cope with after all? Not on your life. We’re moving on to our next adventure.

Anyone know of a chateau for sale with lots of bedrooms so we can do bed & breakfast & still have a large family home? It needs to have some gites & this time a professional kitchen, so my little chef can run his own restaurant.

Normal? Sorry, we don’t know the meaning of the word.