Banknotes of the Australian dollar

From Wiki
Jump to: navigation, search

In 1992 the Reserve Bank of Australia started to issue plastic banknotes, starting with the $5 note. In 2002, the design of all notes (except for the $5 note picturing the Queen) was slightly changed to include the names of the people pictured on them under the portraits, and swapping the order of the signatures of officials on the notes.

As a security feature, these notes contained a transparent window with an optically variable image. Every note also has a seven-pointed star which has only half the printing on each side as well as an image of the Australian Coat of Arms only visible when held up to the light. Australian banknotes were the first in the world to use such features.

On the current 5 dollar note Queen Elizabeth II is on the front of the note along with eucalyptus leaves. There is a number 5 in the right hand corner of both sides. There is Australia written to the left of the queen. The parliament house is on the back of the 5 dollar note. 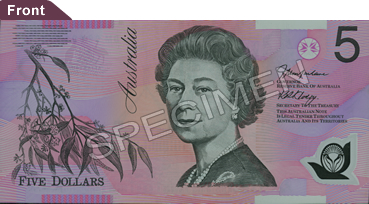 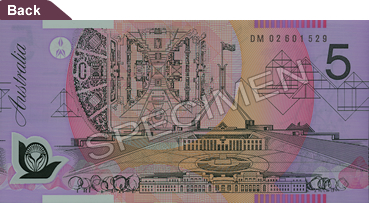 In 2001 there where some commemorative Australian Federation $5 notes where issued. These banknotes are in general circulation but not many are seen due to the limited number printed and they are also popular with collectors. On the front is a portrait of Sir Henry Parkes on the obverse and Catherine Helen Spence on the back. 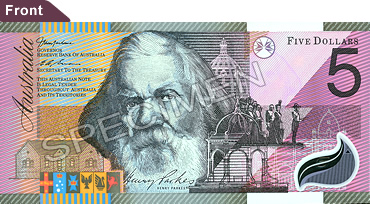 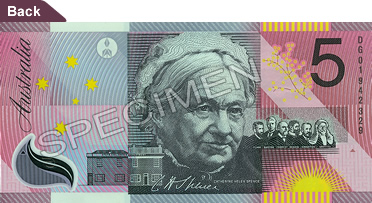 On the current 10 dollar note Andrew Barton (Banjo) Paterson is on the front the note. There is a number 10 in the right hand corner on both sides. Paterson's poetry is in the background. Dame Mary Gilmore is on the back with 19th century heavy transport with horse and cart and verses from her poetry. Her signature is included. A windmill is in the clear window with the raised wavy lines. 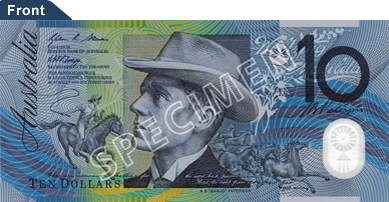 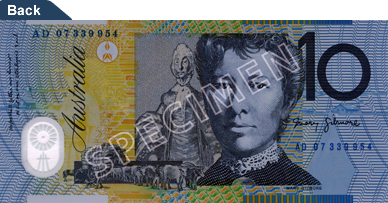 On the current 20 dollar note Mary Reibey with an early colonial building and sailing ship including her signature is on the front of the note. There is a number 20 in the right hand corner on both sides. John Flynn is on the back along with an aircraft. His signature is included. 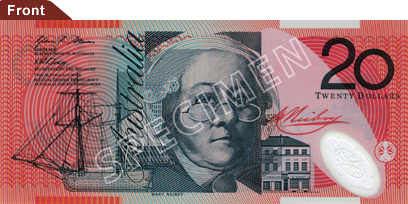 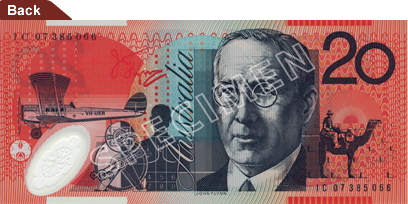 On the current 50 dollar note has a portrait of Indigenous Australian author and inventor David Unaipon on the front, along with drawings from one of his inventions, and an extract from the original manuscript of his Legendary Tales of the Australian Aborigines. There is a number 50 in the right hand corner on both sides. On the back is a portrait of Edith Cowan along with a picture of Western Australia's original Parliament House, and an illustration of a foster mother and children.

On the current 100 dollar note has portraits of soprano Dame Nellie Melba on the front. There is a number 100 in the right hand corner of both sides. On the back is a portrait of engineer and First World War general Sir John Monash.