Why Novak and Serena Are Australian Open Winners, But Also Losers…

The weekend’s climax to the Australian Open saw victories for two players that had looked down and out during periods of their finals.

Despite visibly battling a virus, Serena Williams powered through impressively to beat Maria Sharapova in straight sets; Williams’ sixth Australian Open triumph. Novak Djokovic overcame aches, pains and strains to beat Andy Murray in what was the Serb’s fifth win in Melbourne, where he boasts an overall record of played 56, won 50. An 89% win record. Unbelievable.

Williams and Djokovic’s reward was a cheque for AUD $3.1m.

At today’s exchange rates, Djokovic – who lives in Monaco – would get around EUR 2.13m for that. The prize money is up significantly from the last time he won it in 2013, when the winner received AUD $2.43m. However, the exchange rate back then was also far superior compared with today, with that AUD $2.43m worth EUR 1.88m. So while the winner’s prize money is up 27.6%, the actual ‘take home’ amount when compared with the euro is up only 13.3%. 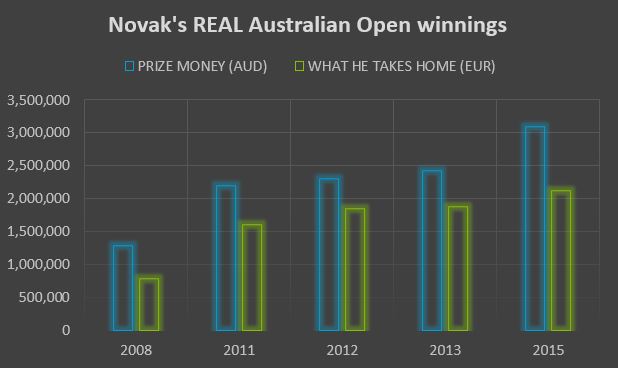 I’m sure Novak won’t lose too much sleep about it, but it does show how the exchange rates can affect these larger amounts.

Serena has also been affected by the rates, poor thing. The current strength of the US dollar means that you get fewer US dollars for your AUD dollars, with the AUD $3.1m winnings worth just over USD $2.4m. The last time Serena won the Australian Open – back in 2010 – she took home AUD $2.1m, worth US $1.85m.

Though the prize money went up 48% in those five years between Serena’s victories in Melbourne, the ‘take home’ amount is up just 30% – again, it’s all down to the rates. 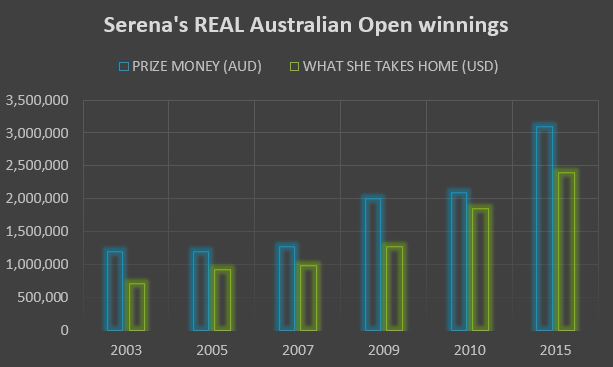 From a prize-money point of view, Serena would nearly have been better off winning the tournament last year instead of this. 2014’s Aussie Open winners picked up AUD $2.65m, which translated to USD $2.3m. This year, though the prize money was AUD $450,000 up on last year, Serena only ‘takes home’ USD $100,000 more than she would have done if she’d triumphed in 2014.

Both players are looking in a class of their own at the moment, and I reckon they’ll be celebrating plenty more slams (and plenty more winners’ cheques) between them in the years to come.

Perhaps next time, the exchange rates will move in their favour – and that cheque will be worth even more.

Letters from the Atlantic: 112 – Emergency, Emergency!