I am a British Citizen who has lived in the USA for nearly four years.  Recently, I’ve found myself giving a great deal of thought to what I refer to as the “Cultural Foundation” of my two children. When we were looking at relocating we loved the fact (and still do) that our children would get to experience a different culture, different ideals, and would be opening their horizons. 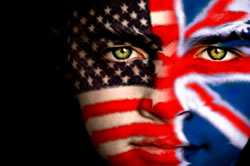 I am a British Citizen who has lived in the USA for nearly four years.  Recently, I’ve found myself giving a great deal of thought to what I refer to as the “Cultural Foundation” of my two children:  my son who is just about to turn 14 and my daughter who is 11.  Before I continue, this is not an article about cultural differences, or what country has it more right than wrong where culture is concerned.  When we were looking at relocating we loved the fact (and still do) that our children would get to experience a different culture, different ideals, and would be opening their horizons.  But that is truly the only depth of thought I had given it.  I had not thought of the long term views this would instill in them, the way in which it may change their belief system, or the adults it would shape.  This article is about the sudden realization I’ve had, that the fact my children would be spending their formative development years in a foreign country, had never occurred to me.

Sounds rather stupid right?  I know it does to me, when I say it out loud!  It’s a huge long term factor that for whatever reason simply got missed with everything else we were focused on as the decision to relocate was worked through.

We (me, hubby, the kids, the dog and the cat!) were all incredibly excited about the opportunity to move to the good ol’ U S of A back in 2005.  As so many of you know, the “to do” list was huge, with so much to organize and either wind up in home country, or start up in host country, it’s an all encompassing job.  We were completely caught up in the plans, the excitement, the fear, the goodbyes, the hellos – all the elements that come in abundance with an overseas move.

My children were 10 and 7 at the time of the relocation and were perfectly happy to begin the “adventure” (as we had all begun referring to it).  They pretty much followed our lead, and threw themselves into transitioning into their new surroundings.  Yes, we had our fair share of “moments” in the first six months:  everything was unfamiliar, schooling was difficult to navigate initially, I felt out of place in my job, my husband had left his in the UK (!) and mundane tasks like mailing letters home seemed like a scary and impossible mission!  Our family’s mantra during that period was “it’s not wrong, it’s just different”, and was repeated numerous times at the dinner table each day!  As with most expats, we survived relatively unscathed, and turned the corner at the six month point after our arrival.

With the humdrum of life ticking along, it hasn’t been until recently, that I have truly seen the impact of the relocation on the personalities of both children.  Neither a positive nor negative observation, it’s more of a sudden revelation to me that I suddenly have two Americans as children!  I’m not talking about accents, or the fact they say “trash” and not “rubbish” or “dude” and not “mate”, or the clothes they wear, or the TV they watch, but at a much deeper level.

My son, as an example, has developed an incredibly deep compassion for the Military.  Yes, he’s a boy, and yes, all boys go through a stage of wanting to be soldiers but this is more about the foundation of culture he has been immersed in, and that he has now adopted as his own.  We live in Texas, a strong Military State, and his interest is not merely a “wouldn’t it be cool” attitude, it’s about the pride he feels for those that serve, what this Country has taught him it stands for, and what he feels he has a duty to protect.

Part of me welcomes, and is proud of, the compassion it has bought out in him, and part of me (the protective mother part!), now worries that I have somehow filled his mind with an option he would likely never have considered in the UK.

{mosbanner right}Another example is that when my children say the “Pledge of Allegiance”, or stand for the American National Anthem at a sporting event, I can see that they truly mean what they are saying.  If I asked them to sing “God Save the Queen”, they wouldn’t have the first clue!  Although sometimes extreme, the American Pride is one of the things I admire about this Country.  Yet seeing it in my children – British children – it has highlighted the influence their surroundings are having on their Cultural Foundation.  Although I want them both to experience things I didn’t get to at their ages, perhaps selfishly, the sentimental part of me wants to feel as though they have a familiarity with my own experiences growing up, as some way of keeping our family history intact.

So, I figured, I’d give you my thoughts on it all!  As this is something I am noticing in my own family, I am presuming there are similar circumstances in lots of other families on assignment who are living in locations in which they, or their children, were not born.  Equally, knowing this site it used by those considering moving to overseas locations, I thought it would be a perspective they might like to add to their own relocation decision, seeing as it was lacking in my own!

In conclusion, I really haven’t made up my mind as to how I feel about it.  I do know I believe that if you chose to live in a Country, you should:  respect its cultures, and its laws whilst remembering you remain a mere visitor whilst in immigrant status.  I just didn’t realize that at the time in their lives that my children were experiencing this “adventure” with us, it would be shaping the Cultural Foundation they will possess as adults.

The Changing Seasons Of My Mind

Guide to Obtaining a Work Visa