The UK publication MediaWeek defines “Zapping” as “Rapid channel switching or surfing via a remote control”. It’s that act you experience when the TV programme you are watching fails to hold your attention for more than a fleeting period as you click the remote control, seeking to be more “engaged”. It’s said that a country gets the TV it deserves and Spanish TV is a very curious blend of the extraordinarily banal, the overly serious and the totally retentive. 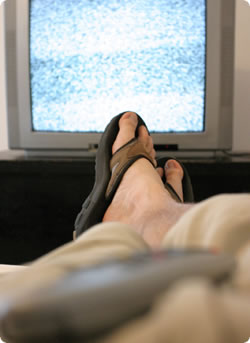 The UK publication MediaWeek defines “Zapping” as “Rapid channel switching or surfing via a remote control”. Its that act you experience when the TV programme you are watching fails to hold your attention for more than a fleeting period as you click the remote control, seeking to be more “engaged”.

It’s said that a country gets the TV it deserves. In Spain’s case I suspect that the former sentence could be good grounds for the Spanish TV audience to institute libel proceedings. Spanish TV is a very curious blend of the extraordinarily banal, the overly serious and the totally retentive.

I make no excuses for the fact that as a result of living in Spain I expect my family to have a more than capable command of the Spanish language. I believe it has to be one of the lasting legacies of a childhood in Spain, a real gift.

Many will know that the “footprint” of the UK’s SKY TV service embraces Spain and depending on the package chosen you can assure your family of wall to wall international media. Thus ensuring no one is behind on the comings and goings of a favourite soap opera or the trials and tribulations of your team’s progress in the Premiership. However, we noticed that our kids, who all go to an International school and speak some Spanish during each school day, were not advancing their fluency as quickly as we had expected. We placed the blame squarely with the Cartoon Network and the Disney Channel.

In moving house we decided to experiment. Whilst our SKY dish, which is the size of a Green Lines bus, would have appeared ugly on the side or roof of our new home, we thought we’d see just what impact not having SKY would have on our kid’s language, and mine for that matter. The experiment has worked to the extent we are all speaking much more Spanish but at what cost.

The national TV channels such RTE 1appears to have the gravitas of BBC1. They carry World news that is invariably accompanied by the most gruesome footage of carnage from a troubled hot spot. Images continue to haunt for months after witnessing and whilst I am not one for sugaring the pill, I am not at all convinced that the warts and all approach is the best.
“Memo to self”: get the kids to bed and dinner eaten before switching on RTE 1.

This news coverage is delivered by a series of Madrileños accented – frankly to my ear the most easily discernible Spanish – card board cut outs. These ultra serious communicators are usually dressed in light grey suits that appear to have been tailored for another member of the staff; it’s as thought the names pinned to the lapel have been switched on the runner rail by a mischievous wardrobe assistant. Their ties and coiffure have had disproportionate amounts of attention. The questionable colour and poor tying of the former being firmly beaten into second place by the time, trouble and effort that has obviously been taken with the latter.

Within ten minutes of RTE1 News you are gasping for the banal and you find yourself lurking in the direction of the regional TV stations which seem to have been produced in the Producer/Director’s sitting room.

Local TV is where the most fun is to be had. Shows range from a Tarot card reading psychic with a broken arm and the most incredibly coloured hair. Who delivers her predictions to eager crackle voiced viewers over the Spanish equivalent of a 0898 premium rate telephone line. I wonder if she foretold her own accident?

There are endless TV press conferences with microphone socks and familiar plastic cubes naming the various channels thrust in the face of an irascible spokesperson for a football team, Town Hall or construction company.

There is a lady on Ojen TV who, every night for the past couple of months, has appeared debating with a less than animated audience the scandals in Marbella Town Hall. Whilst the investigating judge Senior Torres has amassed extensive documentation supporting his arrests I suspect he sleeps at some point. I have not yet tested it but I am convinced this lady who appears to have ambitions for political office is on TV for 24 hours a day, 7 days a week.

In the late 1990’s a press campaign in the UK attempted to highlight the banalities that would follow from the de-restriction of the UK TV media. It used as an example an Italian programme that featured stripping housewives. A natural extension of this excellent and perhaps underused game show format has been conceived and born in Spain, “Strip Poker”.

For some reason, best known to the Producer’s, the bearded compere – who looks like a former Blue Peter presenter – and card dealer seems to spend the entire show tightly suited in a dinner jacket and bow tie whilst his less fortunate table companion loses hand after hand which results in her standing rather self-consciously and totally naked at the dealing table. What is amazing about this show is that even after she has been stripped, as the show’s title suggests, of all her clothes she continues to play, gambling with what I am not sure – perhaps her soul!

If you are unlucky enough to switch on the TV in the afternoon you will be bombarded with the Oprah/Tricia type shows that liquefy otherwise already fragile people. There is worse. A version of the classic Mr and Mrs show where the contestants are not exclusively “Mr and Mrs” but include some “Mr and Mr” and “Ms and Ms.”.

I have never been phased by homosexuality. For me it sits there, as, I think was suggested by DH Lawrence, along with opium abuse as a thing that my life can do without. However the Producers of this show are determined to ram their political correctness, forgive me, down our throats. As the successful partner guesses his partners earlier answer correctly they are oblige to engage in a full on lips celebratory kiss. After the ten questions of astonishing simplicity are answered with 100% accuracy the sight of two fey young men with that curious wet look hair engaging in yet another a screen kiss is too much – zap – surely its tea time.

{mosbanner right}The evening’s offerings are even more arcane. Dubbed US comedies, cop and hospital shows are punctuated with home-grown comedies about the dysfunctional residents and neighbours in an apartment block or a group of suspectly stupid police officers who always seem to be inadvertently shooting each other.

Then there’s the pornography. Around 8.15 am the day after moving into our new property and hooking the TV up to the aerial amongst the emptying boxes I discover that we are able to get around 14 channels. A quick skip thought those available, and amid the murmur of waking children on this cool February morning, I happen upon a naked couple in the throes of full sex, sound effects included. I had heard of this TV spectacle but didn’t believe that it would be “allowed”.

You have to be careful as any night of the week as from around the usual UK “watershed” time acts of graphic coitus and more will be readily available. I suggest you make sure the remote is out of the kid’s hands or better still …….consider re-installing SKY!

I must confess that I am a little lapsed in my commitment to Spanish TV. The World Cup coverage was an inconsistent disaster and there are still some firm favourite programmes including “Boston Legal” and “Desperate Housewives” – which is available in Spanish – which we plead friends and family to videotape for us.

Nevertheless we will continue to sift the good from the bad and who knows we may find ourselves becoming overly qualified experts as a result of some of the extraordinary documentaries on Manchego Semi-Curado cheese or in the devotions necessary to create the finest “5J” Jamon Serrano.

Buying a home in Nova Scotia from Abroad