It’s mid Saturday morning and I am in the supermarket picking up some last minute bits for this evening’s barbecue. The ranks of England’s faithful are filling their trolleys with excellent bottles of “Comportillo” in anticipation of a joyous afternoon and evening. I have spotted in the queues at each checkout, around ten customers deep, perhaps twenty Three Lion shirts. This afternoon it’s England v Paraguay. These are not tourists in any usual sense. Largely this group comprise’s of expats, Spain is there new home but there are times when ancient tribalism takes hold. 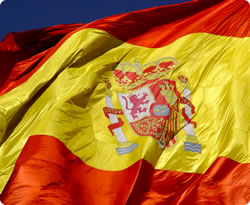 It’s mid Saturday morning and I am in the supermarket picking up some last minute bits for this evening’s barbecue.

The ranks of England’s faithful are filling their trolleys with excellent bottles of “Comportillo” – red and white wine at €1.65 per bottle – in anticipation of a joyous afternoon and evening. I have spotted in the queues at each checkout, around ten customers deep, perhaps twenty Three Lion shirts.

These are not tourists in any usual sense. Largely this group will comprise expats. Roughly this translates to mean very long-term visitors or even those, like me, who has gone the whole hog and obtained Residencia.

Spain is our new home but there are times when ancient tribalism takes hold.

We gravitate to shops such as “Mercadona”, an excellent supermarket chain full of typically Spanish produce – or at least it was. I noticed a stack of Heinz Baked Beans today for the first time…..

As luck would have it I can get some excellent morcillas, chorizos and salchichas blancas – Spanish sausages – and nip to the English Butcher along the street to top up on the Cumberland’s and the best back bacon.

Fast forward to the afternoon when I gather with my young son and a few friends from the neighbourhood at a local Italian restaurant to eat pizza and pasta watch England v Paraguay on a TV made in South Korea. We struggle a bit to keep the bright Mediterranean sunshine off the screen – the restaurant overlooks the beach.

After all the hype, including 30 plus of background in the Sun, €2 and printed in Spain, but this Saturday, more importantly for my Son, it contains a free beach ball in Saint George colours with “Come On England” printed on it, the game starts. Like the spirit of ‘66 it lies a little deflated by Sunday morning. There follows a dull display of football punctuated in the 4th minute by an own goal to ease the journey up the Group B table for England’s trophy hopes.

I guess we may watch future games.

Returning home I am congratulated by my Dutch neighbour pensive about his teams first round clash with Serbia and Montenegro on Sunday afternoon.

After trying to paint the railings outside our home, the paint hardening on impact because of the heat, my Sunday afternoon is spent, sitting on the edge of the sofa as the 20 year old tennis genius, Rafael Nadal, took apart the Worlds No.1, Roger Federer, at Roland Garros. Winning convincingly for the second time.

I cannot wait for Wimbledon.

20 years old….. He must have been presented with his precious Babolat racquet as he toddled clear of his pushchair.

The fact that this youngster hails from my newly adopted country allows me to have a specific feeling of partiality when he holds high that Silver rose bowl in Paris evening sun. Frankly, his performance was far more exciting than English’s team debut in Germany.

Whilst I was watching Rafa’s victory in France, Fernando Alonso romped home to a 13-second victory at Silverstone in the British Grand Prix. Are these successes just coincidence? I don’t really think so.

A number of my kids school friends, aged around 11 years old, are already in full time tennis training whilst handling their school work when its dark. I suspect two, an English girl and a Scot lass, will bring future glory to their ancestral countries. Another boy has a training contract with Manchester City and a fourth lad, like the others pre-pubescence has attained a Carting racing championship of Andalucia as he heads for the International Circuit.

The motivation for these youngsters, their training and opportunity is substantially available by the shed load in this part of the World. The out door life is the lifestyle.

I used to think that Nationalism was just about pride in your own Nation. Whilst the expression “Nation” has caused great difficulty in recent months because of the somewhat tense relationship between Spain and the Catalan Region, its high time we all looked a little beyond our political borders.

We do not need to deny our origins or give up all those things that hail from “Home” – Marmite now in tubes is a clash of cultures but essential non the less – but petty nationalism is the fuel of the Far Right and I thought we had all grown out of that.

The founding fathers of the European Union envisaged a “melting pot” of states where residents would be free to travel, live and work amongst the other states in a seamless and macro sense of freedom.

{mosbanner right}Language is divisive, so it would ease things greatly for me and fellow Mother tongue Anglo Saxons, if you would all kindly speak English. If not we’ll try to meet you halfway and make some crashing verbal abominations. At least we will try to “get by”.

The expression “Expat” envisages that you are somewhere and hail from somewhere else. I don’t accept that you are incomplete without a football team or national anthem to define you. I had a tear in my eye when the Spanish flag was raised over Paris and young Nadal was clearly very moved.

I agree that we will gravitate to those communities where comfort is gained from familiarity. For example, I will always be a Chelsea fan. However, it seems we are evolving. A recent report carried by on expatica.com explained that the process of “time banking” allowed for greater integration between the old and the newer populations of Spain by bartering services – mutual back scratching leading to greater appreciation and understanding of the other.

I really do hope my kids will happily grow up in Spain knowing that their forebears hailed from the UK and Ireland, mainland Europe and Brazil. What does that make them…I guess “New Spanish”. They will visit and probably want to live in the UK, US or wherever the hell they wish. In being raised in such a cosmopolitan environment they will be equipped to relate to many more people from many more countries without being constrained by the notion of a frontier.

6 Weeks Back in England

Our Move to Australia