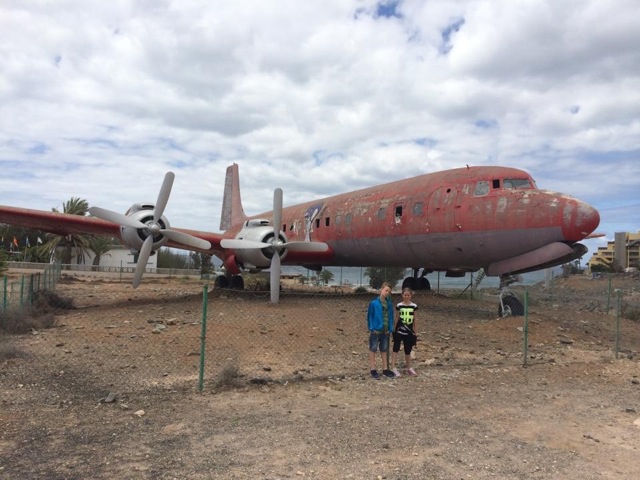 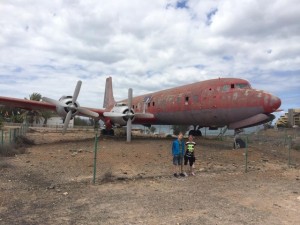 Readers who know Gran Canaria may have spotted what looks like the rusting hulk of a plane near the main road near Bahia Feliz. No, it is not the latest acquisition by my least favourite airline, or one that failed to land at the right airport, but part of a film set. More about the plane later.

We tend to forget that popular tourism in the Canary Islands and Peninsular Spain, is a relatively modern phenomena. Certainly, influential and wealthy Europeans would visit Las Palmas in Gran Canaria, where its beautiful Las Canteras Beach was a popular destination for the few cruise ships that plied the Atlantic before the two World Wars and the Spanish Civil War.

Despite the opening of Gran Canaria’s Gando Airport in 1930, it was only in the 1950s that Gran Canaria would begin to receive significant numbers of tourists; not from the UK, but from Scandinavia. During Christmas 1957, the Swedish airline, Transair AB, organised a flight to Gran Canaria with all of its 54 seats occupied. This was an historic moment, since it was the first flight of the new charter market and the beginning of the mass tourism market that Gran Canaria enjoys today.

Gran Canaria has always been popular with the Scandinavian tourist industry, which continues to the present day. The island is also a very popular destination for German tourists, although its popularity has strengthened and waned over the years according to the German economy. During the reunification of Germany and changes to taxation laws, many German residents could not afford to maintain their homes on the island, with many returning home, together with an accompanying reduction in tourists.  Surprisingly, Brits, in general, have always favoured Tenerife, but with its more discerning tourists heading to Gran Canaria, Lanzarote and Fuerteventura.

Back to the rusting hulk of a plane, just off the main road near Bahia Feliz. Despite its age, the plane still looks impressive when seen at close hand. It has an interesting story, because it was featured in a Swedish film called Sällskapsresan in the 1980s. The film was later released in English as ‘The Charter Trip’.  Over the years, the film has achieved something of a cult status with over 2.5 million people watching the film, making it the biggest cinema success in Sweden to date.

The film is about “a stuffy and nerdy Swede”, who has a fear of flying, who arrives in the fictional town of Nueva Estocolmo in Gran Canaria. The film involves smuggling money in a loaf of bread, an alcoholic duo, as well as some Swedish jokes that do not always translate well. You can find extracts of the film on YouTube; do watch it if you can.

The plane, as well as the film, is a worthy reminder of the early days of tourism on the island. Although tourism as we currently know it, had a shaky start, the popularity of all of the Canary Islands, and the prosperity that it has brought to the islands over the years could be said to have begun with that single charter plane flight and 54 passengers from Sweden.

If you enjoyed this article, take a look at Barrie’s websites: www.barriemahoney.com and www.thecanaryislander.com or read his book, ‘Letters from the Atlantic’ (ISBN: 9780992767136). Available as paperback, as well as on Kindle, iBooks and Google Play Books.
iPhone/iPad and Android Apps: ExpatInfo, CanaryIsle and CanaryGay now available.
© Barrie Mahoney