The Charm of Tenerife

Living in Tenerife is an idea that appeals to many people and John and Maggie Smith, who used to live in Sussex, are no exception. They dreamt of giving up their jobs and moving to Tenerife to live in a warmer climate. Eventually, they fulfilled their ambition, but how easy was it to move abroad? “We originally bought a holiday home, an apartment in Los Cristianos back in the 80s and came out to stay several times a year. Of course, we loved it and wanted to come out more often, so gradually built up the amount of time we spent here, from a few weeks per year to a few months.” 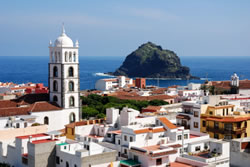 Living in Tenerife, one of the Canary Islands off the African coast, is an idea that appeals to many people and John and Maggie Smith, who used to live in Sussex, are no exception. They dreamt of giving up their jobs and moving to Tenerife to live in a warmer climate. Eventually, they fulfilled their ambition, but how easy was it to move abroad?

For John and Maggie, moving to Tenerife full-time wasn’t a decision they took lightly or made suddenly. “We originally bought a holiday home, an apartment in Los Cristianos back in the 80s and came out to stay several times a year. Of course, we loved it and wanted to come out more often, so gradually built up the amount of time we spent here, from a few weeks per year to a few months.”

In between their visits, like many others, they used the apartment for rentals. “It was in a great location, so we made the most of it by letting it out regularly to our friends and family. Later we found a letting agent specialising in Tenerife and managed to generate a good rental income over the years,” they say.

At the back of their minds they always harboured a desire to live in Tenerife full-time. Initially, it wasn’t possible due to their jobs and existing commitments back in the UK, but it was a dream they certainly didn’t give up pursuing. However, things didn’t quite pan out in the way they’d expected. As the years went by, John suffered from various health problems and he was eventually forced to take early retirement from his job. John’s retirement payout meant that their dream of moving abroad looked more plausible.

“After I retired, we treated ourselves to three months in Tenerife during the winter and it was absolutely lovely. It did us the world of good and we came back to England feeling very refreshed and ready to tackle the world again. Both of us wished we could go back permanently, though.”

The idea of moving came to the forefront of the minds and they couldn’t help spend the following spring pondering the idea. “It was something we used to mention occasionally in the past, but then we found ourselves thinking it through nearly every day,” admitted Maggie. “We began to seriously look into the possibilities, not just the practicalities of moving, but the practicalities of John living abroad and maybe needing medical attention. We needed to be sure that hospital care on the island would be as good for him as back home.”

Their minds were put at rest that hospital care would be up to standard, should they require it, and they progressed to the next stage – looking for properties. “We decided to sell our apartment as, although it was lovely for holidays, we’d want a bit more space living there all the time. We also wanted to have room to have people to stay, as many people had already invited themselves over, even though we hadn’t even got there yet!” said Maggie.

As a starting point, they drew up a list of all their priorities for moving, such as where they wanted to live, how many rooms they required, what facilities they wanted to have near by and how far from public transport and the airport they’d like to be. “John’s very meticulous with planning, so he produced quite a comprehensive table for us to fill in every time we heard about or saw a property,” said Maggie. “Some of the estate agents actually laughed at it when they saw it, as we had everything from the basics to the “˜maybe we might want it one day’ covered!”

Their system may have seemed extreme to some, but it functioned well for them. “It allowed us to get the finer detail and, when you’re back at home, it allowed us to reflect fully on the pros and cons of each property. It’s so easy to get carried away with loving a great view and completely miss the fact that the kitchen isn’t that well equipped, or there aren’t many sockets for plugs in the house,” says Maggie. “Or it is for me anyway!”

Although they really liked Los Cristianos for holidays, they fancied moving somewhere else to permanently live. Being a golf fan, John loved the idea of living in Golf del Sur and having the joys of golf on his doorstep, but Maggie wasn’t convinced. “I don’t mind him playing golf, but I was concerned that he’d end up spending his entire life on the golf course!” she admits. “I liked the idea of trying out living in the mountainous areas, as a completely different change of scene, but John wasn’t sure.”

In the end, after looking at umpteen properties, both near the coastal regions and inland, they found a property that they both fell in love with.  They were visiting the northern area of Tenerife and went to the historic town of Garachio, which was subject to a major volcanic disaster back in 1706. “The little cobbled streets and old townhouses, which were rebuilt in the 18th century, reminded me of old cobbled streets back in villages in England,” explained Maggie. “We loved the town and especially the different atmosphere it had – much calmer than some of the touristy areas in the south.”

{mosbanner right}”We found an old townhouse style property on the outskirts of the town and knew it was for us. It had a large kitchen/dining area and a big living room, leading out to a patio. Upstairs there were three bedrooms and a bathroom. We had a bit of work done to put in an en-suite bathroom in the master bedroom, but other than that we moved in as it was.”

Life near Garachio proved to be very different from what they experienced at Los Cristianos. In general they say it was much calmer, more like a traditional Canaraian town and, although it was popular with tourists, it wasn’t ever too busy. The only slight issue they noticed was that it wasn’t quite so popular with expats. “It hasn’t been too much of a problem for us, as we’re happy with our own company, but there aren’t quite as many expats in this area, compared to in the south.”

Both report being much more relaxed and less stressed since moving from England, but John gained added benefits. Although they were initially worried about the hospital situation, should he become ill, his health has been remarkably improved since moving. “In fact,” says Maggie, “We haven’t needed to use the hospital at all, which has been great!”

Having lived happily near Garachio for five years, the couple are now on the move again. “Although we’ve really enjoyed our time here, we were both beginning to get itchy feet again,” they said. “The island of Tenerife is a great home, but there are so many different parts of it and we wanted to explore other areas, too.”

They’re also keen to make the most of the growing interest in property in the area they’re moving to, Fañabe, where house prices are steadily growing all the time. “John secretly likes the idea of dabbling in the property game and Fañabe seems to be a good place to choose for that purpose,” admits Maggie. “Plus, it’s in a lovely location that we both really like and the whole place has a good atmosphere.”

So, they’ve been busy house-hunting again and back using their tried and tested methods. They’re already seen a dozen houses in the area, but are currently interested in three. “We’ve found three that we really like and we’re hoping to narrow down our choice and buy very soon,” explained Maggie. “We’ve already found a buyer for our property here in Garachio, so hopefully things will all fall into place quickly.”

The island still holds a great degree of charm for them and they say they’d never want to live anywhere else. “It’s a fabulous place to live – relaxed, warm, historic and interesting – and it’s definitely where we call home,” sums up John.

How to Live Green in CEE