Pantomime is a theatrical art form that I am not really fond of. A girl playing Principal Boy, a Villain and the primary female roles being gaudily dressed men playing Dames. It is fundamentally British and whilst its role is that of a harmless Christmas entertainment the synthesis of its message is curiously relevant to the UK. Then again I live in Marbella. 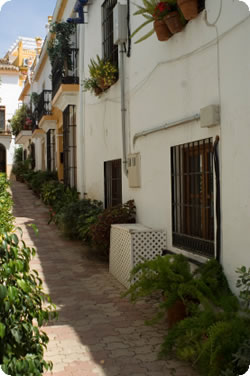 Pantomime is a theatrical art form that I am not really fond of. A girl playing Principal Boy, a hooded hiss inducing Villain and the primary male roles being occupied by squabbling men in gaudily clothes and outrageous coiffure playing Dames. It is fundamentally British and whilst its role is that of a harmless Christmas entertainment the synthesis of its message is curiously relevant to the UK.

Then again I live in Marbella.

It seems the certain elements of the UK media are intent on telling us that we are all part of some sub-Disneyland moving tableau. Little more than a poor interpretation of the parlour game charades, where the dramatis personae are crooks and where everyone is on the take.

The minutiae of our lives here under the Spanish sun is, apparently, of immense interest to a gawping public, their collective noses being pressed up against the glass. At every turn its appears to be open season on those who have exercised their democratic right to leave good old Blighty, with its interminable drizzle, grey skies and Nanny State, to pursue their legitimate interests elsewhere in Europe.

If you don’t like what you see – my message is simple – you don’t have to come. Visiting Spain is not yet compulsory – even though its widely observed smoking ban is. We will happily live our lives in the splendid isolation that this elegant, historic and beautiful region offers without a care for your many miseries.

On Monday night ITV gave us “Marbella Belles” – a prime time TV slot that used to be occupied by the News. The first – and possibly the last – episode featured a group of ladies from all walks of UK life who had relocated to Spain for a myriad of different reasons. These ladies, who I suspect had no hand in the editing or filming process, appeared vacuous, dismissive, unbearably vain and shallow.

I know at least one of the ladies featured who is none of the above Another is an active entrepreneur who is providing an excellent service to her many enthusiastic clients. Then again to praise or to show anything in a favourable light is just not British, is it.

Perhaps it made good television – for who I am not sure – perhaps not.

Yesterday Gordon Brown – or should that be Hooded Gordon – continued his relentless campaign to stealthy mug the good citizens of the UK by back door taxes. The headlines will not be full of praise for his green initiatives – even though his true motives may be foggy – but will major on the poker player’s bluff of seeming to give with one hand to whip back with the other. National Insurance contribution thresholds and the abolition of the 10p base rate for Income tax seem particularly noteworthy.

The biggest opportunity to bring some added security to the online gaming industry whilst garnering substantial cash for the UK purse has been lost by the Chancellor. By levying of a 15% tax on their activities the prospect of wealthy gambling sites flocking back to base themselves in the UK seems highly unlikely. They will continue to thrive in those offshore jurisdictions that they moved to a number of years such as our neighbour, Gibraltar.

Oh yes and I almost forgot, you may know that Sir Elton celebrates his 60th on Sunday. Gawd bless “˜im. David have the frocks arrived yet?

Your Florida mortgage – Is it time to look at multi-currency?