5 Reasons To Move To Spain

Spain continues to top the list of retirement hotspots for Brits who actually want to enjoy some sun in their sunset years. And it’s not hard to see why. But Spain’s allure is not limited to pensioners. Rather, it consistently ranks as the second most popular destination for British Ã©migrÃ©s of all stripes. So if you’re considering joining the hundreds of thousands of people that up-sticks each year for a life overseas, then Spain could be the ideal place. 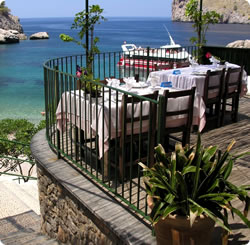 According to a study by Currencies Direct, Spain continues to top the list of retirement hotspots for Brits who actually want to enjoy some sun in their sunset years. And it’s not hard to see why.

But Spain’s allure is not limited to pensioners. Rather, it consistently ranks as the second most popular destination for British Ã©migrÃ©s of all stripes, with only Australia attracting more. And while a life Down Under has its attractions, it’s also a lot further away from the UK if you fancy a visit home at any time to catch up with friends and family.

So if you’re considering joining the hundreds of thousands of people that up-sticks each year for a life overseas, then Spain could be the ideal place. Here are five reasons why:

Let’s face it, a plentiful supply of sunshine is always more appealing than endless days of rain (think back to last summer if you’re in any doubt!). And Spain, by and large, receives a bountiful supply of those golden rays throughout the year.

The sun and warmth also bring more opportunities to enjoy the Great Outdoors, whatever your interests happen to be: sailing, cycling, hiking, golf, painting, or simply lazing around at the beach. As for winter sports enthusiasts, there are also decent ski resorts in the Sierra Nevada mountains in the south, or the Pyrenees in the north.

Unfortunately, over the years Spain’s costas have become synonymous with overdevelopment and tawdry beach resorts. But for those that want them there are still plenty of low-key towns and unspoilt stretches of coast to be found. And once away from the Mediterranean there is a surprising diversity of landscapes to explore: from the wilds of Galicia, to the green hills and forests of the Basque country, and the majestic Picos de Europa or AigÃ¼estortes national parks.

There is a wealth of manmade beauty too: from the magnificent art galleries of Madrid and Barcelona to architectural jewels such as the Alhambra in Granada, the cathedral of Santiago de Compostela and BilbÃ£o’s Guggenheim museum. Or you can simply soak up the atmosphere with a stroll around one of its many beautiful cities: Salamanca, Toledo, LeÃ³n, Girona, Sevilla “¦

Spain has become noticeably more expensive, especially since the euro came into effect in 2002. Nevertheless, prices for property, petrol, food and alcohol – to name just a few items – are still lower than you find in the UK.

And regardless of price, the food and wine are worth savouring. OK, so it may not be a gourmet capital like Italy or France, but there’s more to Spanish food than paella and tortilla. If you doubt it, take a visit to the Basque region, which is renowned throughout Spain for the quality of its cuisine. As for the wine “¦!

Spain’s health care system was rated seventh in the world by the World Health Organization when it compiled a report on the subject at the turn of the millennium (World Health Report 2000 – Health Systems: Improving Performance). And in my experience (having had two children here, one with severe allergies) its reputation is deserved: the staff are well-trained, hospitals and primary care facilities are modern, well-equipped and clean, and treatment waiting lists are short compared to those commonly found in the UK.

A Way of Life

Spain is a huge country, and its traditions and lifestyles vary widely from region to region. Nevertheless, there are some central tenets that make life in Spain attractive.

{mosbanner right}For example, fiestas continue to be an important feature in the Spanish calendar. Famous ones like Sevilla’s Semana Santa, the bull-running in Pamplona (San FermÃ­n) or Valencia’s las Fallas are well worth a visit if you can get there. But each village, town and city has its own monthly schedule of saints’ days and feast days too. And because they have specific significance to the local community they are likely to be more meaningful and entertaining for you as well.

At a more personal level, Spanish families tend to be close knit, with plenty of contact across the generations. Spanish society is also children oriented, with kids the centre of attention for doting family members and strangers alike – which is great if you happen to have some yourself.

Then there is the famed Spanish pace of life. While the pace may be picking up in the cities, Spain in general continues to adopt a more relaxed approach to timekeeping and the dictates of the clock than we do in Britain. Siestas remain commonplace too. Great if you have time to go with the flow!

Paul Allen is a freelance journalist and writer who has lived in northern Spain since 2003. He is the author of “Should I Stay Or Should I Go? The Truth About Moving Abroad And Whether It’s Right For You,” a comprehensive e-book guide for people seeking advice on whether or not to move abroad. For more details about the book, and free information and advice on moving and living overseas, visit his website at www.expatliving101.com

Our First Year in Redlands