How Will Pension Reforms Affect You?

The new rules on pensions kick in at the start of April, promising to give savers more freedom over what they do with their money. But what does it mean to you, what will change, and what do you need to do?

The way it is now

During the first few years of your retirement, you’d probably use the money that you’d saved during your working life to buy an annuity from an insurance company. While you’re currently able to take 25% of your pension in a tax-free lump sum, the rest of the money goes into that annuity whether you like it or not.

For those aged 55 or older who have a defined contribution pension, you’ll no longer have to spend the remaining 75% of your savings on an annuity. You won’t have to buy one at all if you don’t want to, and you’ll be given free advice to help you make the right decision.

From April, you’ll be able to take a number of smaller lump sums instead of one big one, and 25% of each of these smaller payments will be tax-free. By taking lots of smaller amounts out of your pension rather than one big one, you could save money on the tax you’ll pay.

What could it mean for me?

You’ll have more freedom to do whatever you want with your pot of money. There may now be things you can do that simply weren’t possible before.

Ever dreamed of retiring abroad to a place in the sun? Well, once the pension reforms come in, you could take some money out of your pension and put it towards the deposit for a property abroad – or even pay for it outright.

And it would good be a good time to do so too. The pound is at its highest level against the euro since December 2007, which obviously means you’ll get more for your money. 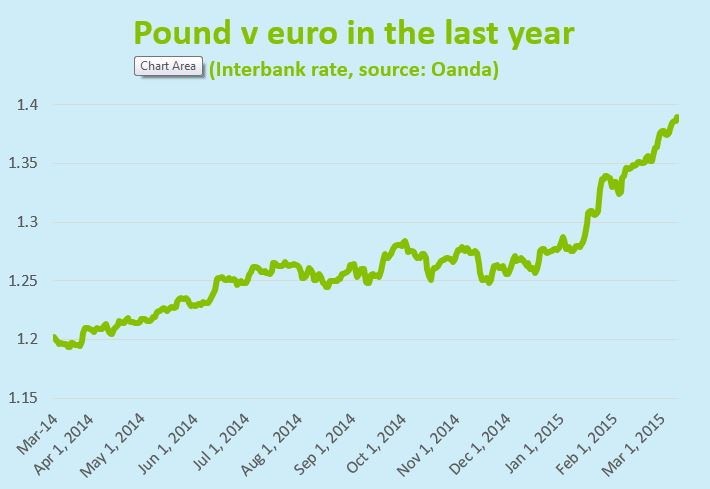 That money could come in pretty handy when you get there or, alternatively, it might mean you can now afford a property that’s even more perfect than you thought you could afford.

Or, you could take some money out of pension to be able to fund you son or daughter through university overseas, or buy the painting that you thought you couldn’t afford from that French art dealer. Simply put – you have more control over when you decide to take money – and how much – out of your pension.

Making the most of my money abroad

If you do decide to spend your pension overseas, you should pay close attention to the exchange rates – dramatic fluctuations one way or the other could mean your lump sum reduces in value from one month, week or day to the next. By managing your currency transfers, and maybe fixing your rate, there should never be any nasty surprises, and your money could end up going further.

Click here for more information on how to get cheaper faster currency transfers.

Letters from the Atlantic: Drilling for Black Gold

Just how to Publish a Study Paper Proposal