Moving to France – How NOT to do it. 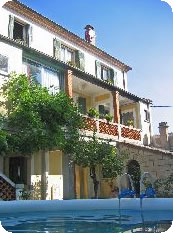 We looked at 100’s of properties to buy, but there was always a problem, usually they just weren’t large enough, or they needed too much doing to them, or they were not suitable for Harry. We did find one, though, and funnily enough it was the very first one we looked at.

It was in the medieval village of Le Poujol-Sur-Orb, close to the small market town of Lamalou-Les-Bains a spa town in the Herault department in the Languedoc region. My mother particularly liked Lamalou, because it was totally geared up for the disabled, having several special hospitals and rehabilitation centres due to the thermal water treatments available there, perfect for all of Harry’s needs. Thousands of people visit Lamalou from around the world every year, so it is awash with bars, cafÃ©s small hotels, restaurants and sports facilities; it even has a casino and theatre.

The property we found wasn’t exactly what we had in mind, it wasn’t very old, it wasn’t a farmhouse, it had no land except a large front garden and it was in a village, but this rather quirky house built by a builder as his own family home during the 1960’s had something about it. There was a good size garden that had been beautifully landscaped with marble and granite paving, the ground floor of the house was mostly garage space which is quite normal in France, there was also a small one bedroom apartment on the ground floor which had been used by the owners as a granny flat and there was a large summer kitchen and stone built BBQ area in the garden.

The huge wisteria climbed its way up the walls and it looked like something from Italy. The first floor of the house had a large lounge/dining room with a huge open fireplace at its centre, two bedrooms a bathroom, fitted kitchen, small office, a balcony overlooking the garden and a large walled roof terrace. The second floor had a series of rooms that required conversion, and another balcony, it easily had the potential to create four guest bedrooms all with en-suite bath or shower-rooms which was ideal.

And so started the long wait while all the paperwork was carried out by our newly appointed Notaire.

We prayed that nothing would go wrong this time.

We moved into the rental villa in Bedarieux two days before my kids arrived from the UK for Easter, my brother finally returned to the UK the same day – I was very thankful that he had stayed with us for so long, as his support had been utterly invaluable.

Unfortunately the villa was not large enough to house all of our stored furniture, so we only brought down the essentials, leaving the remaining furniture in the mountain village.

Easter was fantastic; the weather was great, it was so hot on Easter Sunday that I was worried all the Easter eggs would melt before the kids could finish the Easter Egg Hunt! We walked the dogs, went swimming in Lake Salagou and generally enjoyed being together. They stayed for three weeks, but all too soon it was time for them to go back to school in Devon. Luckily I did get the chance to take them to see the house we were buying and they both thought it looked great, so that was a big thumbs up.

Just after the kids had gone back to the UK, my parents’ elderly 14 year old dog took a turn for the worst. Harry was very very fond of her but the fateful day arrived when we took her to the vet and he told us she would have to be put to sleep. Poor Harry was devastated, he loved the dog so much, she was really a dear friend to him, but as the vet injected her, it was plain to see the relief on the dog’s face, she had found peace at last and no more pain.

After that Harry became quite ill and at one point was even planning his own funeral! He got us all very worried, but luckily came through it and my mum got him another puppy, who is a complete mischief and whose name is Bella. She was a boon for Harry, as she loves affection and enjoyed sitting on his lap especially if they went out anywhere.

We had decided it was long past the time for Alex to start French school, so just before the April holiday we went to the little village school in Le Poujol-Sur-Orb to see the head teacher and discuss enrolling Alex. It was not as straight forward as we had imagined. We had to take him to the doctors to have a medical and prove that he had had all his inoculations; we also had to get him insured so that if any accident should happen at school, he would be covered.

This is something that the school is liable for in the UK, so we were rather surprised. Having completed all the paperwork, we took him for his first day – he was back in the maternelle class, the equivalent of nursery in the UK. Children in France do not have to start school until they are six, although Alex would have been at proper school in the UK for almost two school years by now.

{mosbanner right}The first few days were hard for him, he didn’t understand anyone and this made making friends more difficult. The French kids were great, though, and he soon had lots of pals and got involved with the end of term “˜Spectacular’, where he had to perform on stage. The rehearsals were mayhem, but he went along every week and was a real star on the night, in front of the whole village! He soon settled in and now, almost two years on, he speaks French quite fluently and really enjoys school.

He goes to school on Monday, Tuesday, Thursday, Friday and Saturday morning, from 8.30am to 12.00 mid day and 2.00pm to 4.30pm, we are lucky that his school runs a canteen, so if we want, he can stay for the two hour lunch break. The majority of children do go home for lunch however. The school holidays in France are quite long, the summer holiday is 8 weeks from the beginning of July to the beginning of September, there aren’t half term holidays quite like in the UK. There are also a number of Saints’ days when everything, including, the schools are shut.

Don’t believe anyone that tells you your child will pick up French immediately and talk like a native within a few months. It simply isn’t true. All the Brit families we know here with kids agree that it took their children at least a year to be moderately fluent in French at a basic level and around two years until they were completely fluent for a child of their age. Older children seem to find the transition much harder than young children, although older children do understand conversation much quicker than young children generally.

British Expats – My place in the cyberworld

Government of Canada supports Saskatchewan in attracting immigrants to the province