Three Words For Everything

When I decided to buy a broken down granite house in a tiny medieval village overlooking Italy’s Lago Maggiore, I had no plans to live there permanently. And I certainly had no plans to marry the partner I bought the house with or give birth, in Italian, to two children. But all these things came to pass, as things have a habit of doing, and here I am marvelling every day at the beauty of the spot I fetched up in and watching my children in wonder as they start to negotiate the complicated world around them. 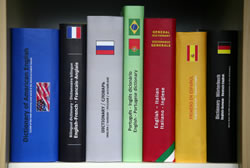 When I decided to buy a broken down granite house in a tiny medieval village overlooking Italy’s Lago Maggiore, I had no plans to live there permanently. And I certainly had no plans to marry the partner I bought the house with or give birth, in Italian, to two children. But all these things came to pass, as things have a habit of doing, and here I am marvelling every day at the beauty of the spot I fetched up in and watching my children in wonder as they start to negotiate the complicated world around them.

The idea of the OPOL approach is that the child learns to associate the words of one language with one person or set of people, thereby encouraging him to ringfence each language and avoid mixing the two. A useful technique for enforcing this is to use the formula, “Pappa (Dad, Father) says, Mama (Mum, Mother) says”¦”. When AJ says, for instance, “There’s a hund,” I reply, “Pappa says hund, Mama says dog.”

But in situations where the bilingual family is living in a community with a third language, in our case Italian, the simplicity of the OPOL approach goes out of the window (although not the approach itself in its entirety). It’s impossible not to speak both English and Italian in front of my children. For example, I find myself repeating in Italian things I’ve said to the children in English when we’re talking to Italian-speaking neighbours. I do this so as not to exclude the neighbour. If necessary, I also translate my neighbour’s words from Italian into English so that the children will understand what’s being said, especially if it’s being said to them. And finally, as a family, we tend to use Italian terms for some things rather than the English or the German, probably just because these things are so Italian that we don’t see the point in groping around for an Anglo-German equivalent.

According to the proponents of the OPOL approach, this use of more than one language by a single person could be confusing to the child, but I see no evidence of this. AJ hears me talking Italian (admittedly pretty badly) every day, and most of our friends are bi- or multilingual, who are able to switch languages from moment to moment so he knows that people speak more than one language. Like them, though, AJ seemed able from a very early age to determine which language he should be speaking and would happily switch to the relevant “˜mode’.

And how are the children coping with their trilingual world? Like sponges! Bea is starting to say her first words, mostly English, as far as we can tell. But she also responds correctly to German. AJ’s English is as it should be for his age, although he was slow to start talking. His German is a little behind, probably because he sees less of his father. But it’s clear that he understands as much as can be expected of the goings-on in German and when he comes back from a period of immersion in German he’s streets further on.

{mosbanner right}While AJ picked up some Italian words from the neighbours before he was three, he started kindergarten (scuola materna in Italy) with almost nonexistent Italian. The kindergarten experience was at first very tough for him, as one would imagine. But every day he comes home with a new phrase or signs of understanding something new, and every day he becomes more confident with his peers. After initially being fairly apprehensive about taking on a non-Italian-speaking child, the teachers at the kindergarten seem to have gone to great pains to speak clearly and repetitively to AJ so that he learns, and to explain to the other children why he sometimes doesn’t understand what’s being said so that he’s not thought odd. The strong element of routine at the scuola materna has also helped, I’m sure.

Of course AJ mixes his languages, particularly when he is excited, and some would say that’s not a good thing, but I’m not hung up on this. Kindergarten aside, it will be a while yet before he’s out on his own trying to make himself understood with monolingual friends and relatives. There will come a time, I’m sure, when his vocabulary is so great in all three languages that he will be able to find the right word for the thing he means in the right language for the person he is talking to. He also shows early signs of learning how to find an alternative for a word he doesn’t know or how to explain in other ways what he wants to say, a crucial communication skill for anyone.

For now, I’m content that AJ seems to be able to make himself understood most of the time, that he switches languages easily depending on who he’s speaking to, and most of all that he seems to be completely comfortable with the fact that he lives in a world where there are three words for everything.

Postscript : In our search for techniques that might help our children towards multilingualism, we’ve found the British publisher Multilingual Matters extremely helpful. They publish some very informative books on the subject and the quarterly Bilingual Families Newsletter. See www.multilingual-matters.com .