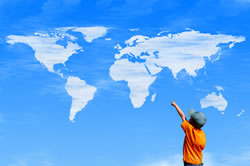 I like toys as much as the next man. Be it train sets, steam cars, remote control helicopters, iPhones or Nintendo. Other, sometimes questionable, gadgets have also come onto the market in recent years, including devices for treasure hunting on the beach and public areas. I received an email from an American gentleman last week who said that he had been so inspired by ‘Letters from the Atlantic’ that he wanted to move to the Canary Islands. He had but one question to ask before he made his move. He asked whether or not he would be allowed to use his metal detector on the beaches of the islands.

These gadgets are, of course, frowned upon by many who regard them as merely looting the coins and jewellery of unfortunate souls who have lost them during a day out on the beach. Others will say that these treasure seekers have the potential to unearth historical artefacts from the past, although whether this is for the public good, or for personal gain, is an on going debate. I replied that I thought that he should investigate whether or not he is able to gain residency to the country before he worries too much about treasure hunting. Somehow, I think his priorities were a little distorted.

As for current gadgets, I have been a little surprised at the sudden interest in personal drones. For the uninitiated, drones are a kind of upgraded remote control helicopter that hovers wherever the operator directs it, with many sporting a camera that happily takes photos or even videos of the world below. It is supposed to be a hi-tech toy, but it does take remote surveillance to an entirely new level.

My first encounter with a real life drone was one hovering over the outdoor swimming pool in our village. At first I was fascinated to watch this amazing piece of technology hovering just a few metres from where locals and myself were swimming and sunbathing. However, the more I thought about it the more I realised that the unintended consequences of this tiny flying machine could be very serious, particularly if carrying a camera on board. Hovering over public swimming pools and beaches taking photographs and videos could be seen as a pornographers’ paradise, and when involving children is potentially much more serious.

Then there is home security. Is your terrace or garden shielded from prying eyes? Clearly a hovering drone could easily become a public nuisance with its irritating buzzing and intrusive nature. As I said earlier, I adore new technology of all kinds, but I am also a great shot with a catapult, a widely unrecognised skill of mine that I picked up during many boring lunch hours when I was at school. Let me be quite clear, should I spot a drone hovering over my garden it will suddenly find itself shot down into oblivion. After all, wherever in the world we may live, an expat Englishman’s home is his castle.

If you enjoyed this article, take a look at Barrie’s websites: www.barriemahoney.com and www.thecanaryislander.com or read his book, ‘Expat Voice’ (ISBN: 9780992767174). Available in paperback, as well as Kindle, iBooks and Google Play editions.
iPhone/iPad and Android Apps: ExpatInfo, CanaryIsle and CanaryGay now available.
© Barrie Mahoney

Your Guide to Shopping Online